The Business of Murder

THIS PRODUCTION HAS NOW COMPLETED ITS UK NATIONAL TOUR.

Designed and directed by Michael Lunney

Stone, a humourless and dour man, invites Dee, a television playwright, over to his flat on the premise of discussing a script. Once there, she is surprised when superintendent Hallett, the man with whom she is having an affair, also arrives for an entirely different reason.

But nothing is as it seems, and as the plot twists and turns the motive of their host Stone gradually becomes clear. They are all, it would seem, in the same business…. The Business of Murder.

This is a gripping psychological thriller from the pen of that doyen of great detective / thriller writers Richard Harris (A Touch of Frost, The Avengers, The Sweeney and The Last Detective).

Starring Robert Gwilym, known by millions for his role as Dr Max Gallagher in Casualty, alongside Paul Opacic (a regular as Steve Marchant in Emmerdale, Mark Waddle in Bad Girls and Carl Costello in Hollyoaks), and Joanna Higson, who played Maxine Donnelly for two series of Shameless and is currently appearing as Vicky Hall in BBC TV’s WPC56. 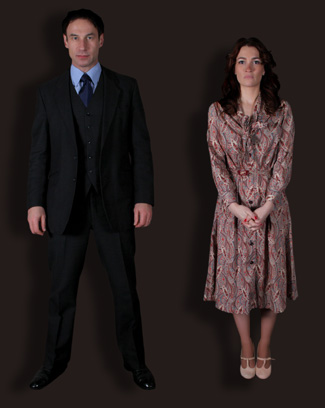